Who names a dog Shelly?

It’s the most human name and it was bestowed upon the most canine of dogs. Shelly was a chocolate lab with scraggly, reddish-brown fur and crazed eyes. She was the kind of dog that walked sideways, like a coyote or feral dog on a Mexican beach. With a benign tumor on her underside the size of half a grapefruit, she looked like an inverted camel. 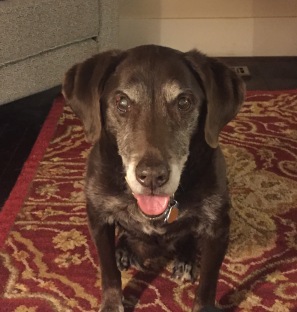 All of this made her look pretty intimidating when I first met her New Year’s Day 2010. She was lean, muscular and about four years old. I was nervous about adopting this dog and was certain this was a test from my then girlfriend, now wife, to see if I really loved dogs.

I must have really loved Erin because miraculously Shelly somehow landed in the backseat of our car as we headed home.

To understand my relationship with Shelly is to follow the timeline of dogs we have owned. Our first was a German shepherd named Samson. He was the king of the castle. Shelly was our second and a thick black lab named Roxy was our third. Samson passed away in 2012 but the last years of his life were hard. Hip dysplasia limited his movements and he spent his final days guarding the house.

We’d start almost every morning the same. There would be a short walk up to Fairmont Park where I’d take them off leash. Roxy would shag the dirty tennis ball I threw while Shelly roamed the park doing her “projects.” And by projects, I mean find disgusting things to eat. Trust me, there is no shortage of disgusting things to eat at Fairmont Park.

My arm would tire before Roxy was done playing fetch. Taking a moment to catch our breath, I would see Shelly wandering in a serpentine fashion, digging here and rolling in this there. She casted a shadow of a content, adventurous, and stubborn dog.

This was our routine until Roxy died prematurely from an aneurism. It was hard on all of us and I could tell losing Roxy especially hurt Shelly. It’s always difficult to lose a good friend. 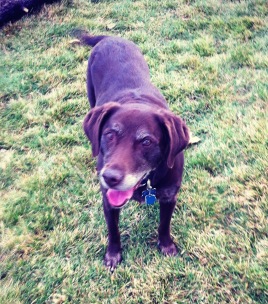 We continued our walks every morning. She knew the moment I put in my ear buds that were would head out into the neighborhood. Shelly would do this hippity hop dance, running from the laundry room to the front door. More often than not, she’d slide across the hardwood floor and collide with the door.

She was accident prone and nothing highlighted this better than the time she broke her front right leg. Jumping out of the truck, she must have twisted her paw up in the seat belt and came up limp. We took her to the vet to see what was wrong and we left with her leg set in a bright pink cast. Even though she walked around the house like a stub-legged pirate, nothing could slow her down. I’m sure she was as relieved as we were when we finally took it off. The clomping sound was maddening and a little terrifying.

There was the time she got mites, the one time she fell in a hole at Sugarhouse Park, or when she got stuck in the fence. Add that to the hundreds of times she ran into a wall, fence, door, window, rock or any other unmovable object, and I’m surprised she only broke her leg once.

She had an exuberance unmatched by other dogs.

She became my greatest cheerleader when I came home. There would be the equivalent of a ticker tape parade as she jumped, barked and celebrated my return. I knew it had a lot to do with the biscuit she’d get the moment I got into the kitchen, but it was always awesome.

Everything felt right in the world when we were together.

Chocolate labs are notoriously food obsessive, but this dog was no exception. She scrounged every corner of the kitchen looking for scraps as if a spare pork chop was tucked under the refrigerator. Cooking dinner became an obstacle course with Shelly pacing, waiting to ingest anything that might fall to the floor. There was nothing she wouldn’t try to eat. Whether it was cucumber skins, week old Chinese food boxes or random “treats” from the bathroom waste bin, if it fit in her mouth, she was going to eat it.

I probably didn’t help. Even though it drove Erin nuts, I always gave my bowl or plate to Shelly to finish off what was left. I doubt most dogs got this much human food and I don’t think any dog appreciated that fact more than her.

As voracious as her appetite was, nothing compared to her thirst. I have never seen a dog drink as much water as Shelly. It was as if she was drinking the water so the other dogs couldn’t. The amount of slurping coming from the laundry room was like a rugby team hosting a boat race. She drank water the way Irish poets drink to forget.

We found out years later the reason why Shelly was so tough, neurotic and intense. She suffered from a mild case of Cushing’s Disease. It made her almost indestructible. It also explained why she had a pot belly and an insatiable thirst. Shelly couldn’t feel pain and nothing could stop her.

I remember watching Samson slow down and I prayed it wouldn’t happen to Shelly, but it did. It was gradual, as it always is, but still painful. The celebrations at the door were replaced with her not hearing me come home. The Elizabeth Street walks became a slow walk around the block. Trips to the water bowl became less frequent. She still had her appetite for human food, but the injuries she endured were more to do with her age than her previous limitless energy.

It was last Thursday when I called Erin and said it might be time to say good bye. It was a tearful conversation on both ends, because we promised ourselves we would never let our dogs suffer. I made the appointment with Dr. Butler at East Valley Veterinarian Clinic and made peace with this horrible decision. 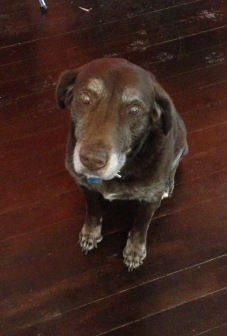 What I loved and will always love about Shelly is she was just a dog. She lived for walks, scratches, snacks, meals, naps, drives in the car and having her family around her. There was never any sort anthropomorphism with her. Shelly was simply the most interesting dog I’ve ever know. Shelly was Shelly. She was and will always be my companion, guardian, lunchmate, and best dog.

She was loyal to a fault, grateful to be in a loving home and free to be herself. Every bad thing she ever did in the nearly six years has been rightfully forgotten and all I can think about is how lucky I was to have this silly dog in my life.

I remember hearing a comedian say that he doesn’t believe in heaven but knows dog heaven is real. I can’t disagree. The only thing that takes the sting out of never going for another walk or drive with Shelly is the idea of her reunited with Samson and Roxy. The first three, The Great Three, are back together with Samson barking orders, Roxy playing fetch and Shelly doing her projects.

They’re all strong, healthy and happy. I wish I could check in with Shelly from time to time, but I know we’ve had our final good bye. I can only hope she knows how much she meant to me and she’ll never be forgotten.

Ben Raskin is a bartender at Keys On Main and a writer for USANA Health Sciences. Follow him on Twitter @BennyRaskin. He is really going to miss Shell Bell. What he wouldn’t give for one more Elizabeth Street walk.