There is nothing sweeter than hitting the InstaCare while on vacation.

No-siree, there is nothing better than sitting in a crowded waiting room full of people with irritable bowel syndromes, wet hacking coughs, and sporadic bouts of Tourrette’s all the while your wife is waiting patiently to go on a hike through the Grand Tetons.

Stupid Swimmer’s Ear came and bit me right in the butt. And yes, I know the difference between my ear and my butt. Can you imagine a horrible disease called Swimmer’s Butt? Even better, can you believe that I titled this post, “Fight ear pain with confidence?” I’m going to get like 43 hits on this blog. Anyway, in a stupid effort to lose weight and get in the best shape of my life, I got a bacterial infection in my right ear from a dirty municipal pool. That’s right, I went to an integrated pool and got a bacterial infection.

You do the math.

Both of my readers know from the last blog that I got me a case of Swimmer’s Ear and it’s been like living in an empty concert hall. Everything is dulled and sounds distant. The pain is pretty remarkable with waves of hurt coming and going with no rhyme or reason. It attacks like Turkish militants. One minute, I’m enjoying a cup of strong coffee with a strong cigarette with a doner kebab in one hand and a bowl of kariyarik in the other and Whammy!!!! My right ear feels like every cab driver in Kahramanmaras drove their hack into my eardrum.

It hurt so bad that Erin drove me to InstaCare in Jackson Hole, Wyoming on Sunday.

As a rule of thumb, I only want to go to InstaCare while on vacation to either have a broken bone set or my stomach pumped for alcohol poisoning. Things like swollen eardrums or erratic heartbeats should be reserved for primary health providers. And when did doctors become providers? Is everybody in a hospital a provider now? My sister is a doctor and I think she’d lose her mind if a quarter of a million dollars in student loans plus 20 years of school put her in the same camp as the phlebotomist who drinks too much in the morning. Sure, it might take maybe two more seconds to designate the nurse practitioner from the physician assistant from Walter who works in billing, but let’s start calling doctors doctor and whatever else those people in scrubs are what they are—not quite doctors.

You wouldn’t call a male stripper a cop because he wears a badge and carries a large baton, would you?

The provider in Wyoming was a nice person even though she took a running start to put to otoscope in my ear. I’ve discussed this in the past that I’m at the point in my life where I don’t want to have any more surprises, but maybe I was hoping for a surprise with my ear. I wanted her to say that I had a Ceti Eel in my head controlling my cerebral cortex making me do outlandish things, but no. No reference to Star Trek: The Wraith of Khan or the provider saying there was jellybean jammed in my head, she just said, “Tough cookies for you, Mr. Baskins, you have swimmer’s ear.”

She actually called me Benjamin Baskins which was a kid I went to Garside Junior High with. I wonder what ever happened to him?

Nonetheless, I successful diagnosed my condition without her putting a toilet paper roll through my head. But here’s the rub, instead of getting any relief, she prescribed me an ear drop that had cost $200 before insurance. Thanks to ObamaCare (Thanks, Obama!!), it only cost $40 but Jesus Christ, when did life saving medicine cost as much as a decent bottle of Scotch?

Also, what the hell does a guy have to do to get his hands on some pain pills these days?

I get that some nefarious people shop around with doctors trying to get them to write prescriptions for Lortabs or Percocets, but when did have actual pain not entitled you to pain pills? Huh, Obama?!? I’m talking to you, Mr. President. Every piece of literature the provider gave me from InstaCare said that ear pain can be some of the worst pain on the planet, but just take half a baby’s aspirin with a swallow of apple juice for the pain. Remember what I said about those Turkish taxi drivers? The reality is the pain feels like every one of those guys are wearing a vest filled with C4, broken glass, ten-penny nails and rat poison. Really hurts like an SOB.

But don’t worry, I took care of the pain naturally with good Christian thought and half a Diet Coke.

Because Erin still cares about my health, she made me go on a beautiful, life-changing hike around Jenny Lake while my ear throbbed in pain. Here is a picture of her looking adventurously across the lake. 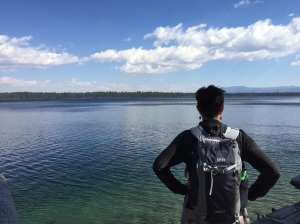 I’ll keep you posted if my have to cut my ear off in the next day or two.