It was like looking in the back of Linda Lovelace’s throat for 44 minutes. 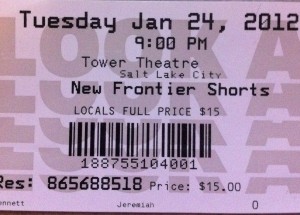 Who would have thought that this little ticket could cause so much emotional, psychological and physical damage to me, my family and my friends? It was like a Willy Wonka golden ticket that promised an evening of vomiting and nausea instead of chocolate and Umpa Lumpas. At first it seemed like a great idea: buy some tickets to the Sundance Film Festival, hang out with friends, have a couple of drinks, maybe see a celebrity… There is no way to measure how wrong I was and I am still trying to figure out exactly what happened that very cold Tuesday night at the Tower Theatre.

Here’s the cast of characters that made the plunge to endure the worst movie I have ever seen: Kat and Matt (vet tech and epidemiologist), Sarita and Gwyn (professor and a Welshman) and Erin (my plus-one and fulltime life saver). We got together at the house for beers and wine, the State of the Union and little trial podcasting (we’ll get to that later). The night felt so full of possibilities. We were going to see a series of shorts and we had no idea what was in store. It was a dangerous game of movie Russian roulette we were playing but I was up for anything. I had a belly full of Schlitz in me and I always enjoy new experiences. As it turns out, I was severely under-lubricated for the affair that awaited us.

We caravanned up to 9th and 9th. We were expecting the theatre to have a line around the block but there was nary a person to be found. Walking into the old movie house, it felt like there were more volunteers in those expensive cool jackets than patrons to see the shorts. No matter. I figured it meant that we would be able to stretch out in the theater. I grabbed a bag of popcorn and a bottle water for Erin and went inside.

This is not my first Sundance experience. We have been to a couple of showing up in Park City on the closing day. It was a chance for us to see the award winners at the film festival and see the straggling celebrity that couldn’t get out in time. It usually was just a chance to get out of SLC, beat the inversion and grab some lunch. Kat and Matt took the initiative this year to get a bunch of tickets for us to see wide breath of films. So, Tuesday was a special day for me: it was my first time at the Tower Theatre and it was my first Sundance film held in the middle of the festival.

We sat towards the back. The screen had that unique Sundance montage of the name written in a variety of ways as it crawled every which direction. Robert Redford must be pretty stoked about how his little film festival has exploded into a major event in the showing of movies. Sitting in the old theater with its butt-pinching seats, sticky floors and balcony it felt like I was just as much a part of the film experience as the people who made the movies. It’s a pretty cool feeling to take ownership of an experience and share it with a roomful of people.

That was the last bit of hope that I had for the evening.

The lights quickly dimmed and the host got on the raised stage and introduced the films. There were five on the docket. For the life of me, I only remember the title to the visual assault that I saw that night simply because it was called Seeking the Monkey King. I like primates and regal titles. I let out a yelp of joy at the prospect of seeing a movie that could potentially have monkeys in it. Considering how much I liked the James Franco movie from last summer, I figured it might be the back story to The Planet of the Apes.

The first short was some dark tale about people being burnt alive in Detroit for illegally hooking up electricity to their house and a widow talking about her husband’s suicide. A real laugh a minute. I figure because it is an independent film festival, the first movie needed to remind everybody who fragile life is and blah, blah, blah. As a rule, I like movies with explosions, girls jogging on beaches and cars doing Tokyo drifts. But since not everything can have Vin Diesel in it, I endured the first movie without comment.

After a brief pause, the first short ended and The Monkey King started. Bring on the Simians! The music was industrial as the opening credits started. Think Trent Reznor meets a power substation. The screen exploded into a strobe-light of colors flashing on what could only be described as a large sheet of crumbled tin foil. Flashing from red to gold to blue to silver, the industrial music pumped as the diatom images shifted and pulsated. My first reaction was the scene in 2001 when Bowman goes through the Monolith. I knew very quickly that this wasn’t going to be about Dr. Zaius at any time soon.

I think I have the average stomach of a 37-year old man who regularly eats chili, drinks beer and enjoys roller coasters. I don’t get seasick, I can scrap a dead cat off the concrete without wincing and I am not bothered about cleaning up vomit. On the other hand, certain things trigger an immediate sickness that I can’t quit and The Monkey King had a lot of these components. I hate house music, I despise flashing lights and I have lived my life in perpetual fear of biting into tin foil. Somehow, everything that causes me to curl into the fetal position was in this movie and I didn’t see an end in sight.

It was a throbbing mess that proceeded without end. It was the visual equivalent of nails on a chalkboard. Just when I felt like I was going to hurl into my bag of popcorn the screen would go static and some cryptic anti-authoritative text would span the screen. I could barely read the rambling text because my stomach had an all-valley karate tournament going on inside of it. Just when I got to the end of reading the political message, the tilt-a-wheel of flashing lights kicked back in. Jesus.

I decided the only way that I could watch this grand mal seizure was lower the bill of my cap down and look at the flashing lights peripherally. It is kind of like watching a solar eclipse through a shoebox—there is no way one wouldn’t go blind or mad staring at the screen. The six of us in our group were battling our own demons. Against my better judgment, I elected to stay seated and watch the eyeball rape that was screaming across the screen. Sarita, Matt and Erin thought better and retreated to the lobby. In hindsight, I wish I had followed suit. In all honesty, I am a little bit nasueas thinking about this movie as I am writing this.

The waterboarding continued. I kept thinking two things: one, why am I here without a soothing cocktail in my hand and who the Hell was the intended audience for this movie? Minutes became decades as the lights hurled in cacophony against the screen. I was getting ready to throw in the towel when the first levity of the night happened. Somebody sitting behind me said in a very loud voice, “oh, now I get it.”

That was the straw that broke the audience’s back. The movie went from some sort of criticism against totalitarianism and turned into Mystery Science Theater 3000. The decorum of the night was lost and the only way we survived this social experiment came from throwing jabs at the screen. At the 20 minute mark, the screen turned black and the audience exploded in applause thinking the movie was over. To a roaring round of applause and laughter, we released the loudest groan as we were duped as the flashing lights came back on.

I really was getting sick of looking at the screen. So, I hid in my bag of popcorn and looked at my watch. At the half-hour with the theater talking and taunting the screen, somebody in the front, turned around and shushed the audience loudly. Everyone was embarrassed to quiet when the same guy said loudly, “Ah, just fucking with you.” Another huge laugh. At this point, I was checked out and waiting for it to end and at the 44-minute it did. Sweet relief.

Our significant others joined us as the third short started but Erin and I had had enough. We said good bye and snuck home to eat Dramamine and go to bed. I suffered through a fitful night’s sleep invaded with visions from the movie in my dreams. I felt like I was sleeping in a hammock the way my stomach retaliated against me for seeing this movie.

I know it is in vogue to badmouth the work of people who put their time and efforts into a project. It is drastically easier to destroy than to build and to that point, I am not suggesting that the creators of Seeking the Monkey King should be fed to a pack of dogs. Any movie that is filmed and accepted for Sundance must have some sort of value but I didn’t see any in this LSD trip. I am a meat and potato kind of guy and this thing is better left to more hipsters in fedoras and skinny jeans.

Ben Raskin bartends at Keys On Main Wednesday through Saturday. Follow him on Twitter @BennyRaskin. He can be found on his days off watching Tremors, Remo Williams and Buckaroo Bonzai.