It Came Out of Nowhere

Cyclists have a lot to deal with every time they go for a ride. Punctured tubes, traffic, potholes, and countless other obstacles can ruin a weekend ride.

To the myriad of things to avoid, let’s add skunk attack to the list.

Fourth of July was supposed to be a leisurely ride along the Jordan River Parkway, followed by brats and brews at the house. My wife and I were heading out for a 20+ mile ride on a beautiful (maybe even hot) Saturday. Salt Lake City has a system of trails for pedestrians and cyclists. You can explore the rivers, marvel at the mountains, and, best of all, traverse from one end of the valley to the other without dealing with cars.

The Parkway was lovely. The river was high with rich vegetation growing along the trail. From SLC, we were pedaling south towards Utah Lake. I was loving it. After a week of working from home, it was awesome to ride fast, check out the scenery, and get some exercise. Crossing the bridges and barreling through the tunnels, I made the mistake of saying this was a ride I would never forget. 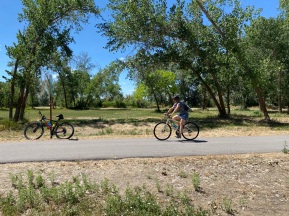 Little did I know a black and white fellow guaranteed I never would.

I cruised along a straightaway section when I saw something dart out in front of me. My first thought, it was a cat and I didn’t want to hit it. Cranking on my brakes, I skidded to a stop and saw what I almost hit. It was the size of a cat, but this animal was layered in thick fur with a bushy black and white tail.

I was at a complete stop about three feet away from this hissing beast. We were clearly not social distancing. It leaned on its front paws like a yogi with its tail aimed at me in a U-like fashion. My first reaction was an uncontrollable fear this sucker was going to bite me. Its small head was filled with teeth and it was eyeballing me something fierce. My second thought was skunks make smells. Instantly, the skunk unleashed a plumb of mist and a stream of musk hitting my bike and worse, me. And just like that—the critter ran off the side of the trail and into the thick brush.

My wife caught up to me wondering why I’m standing in the middle of the road. Before I could tell her about the attack, she said it reeked of burnt diesel fuel and manure. When I told her about the skunk, I got the eyeroll of the century.

“Only you, Ben Raskin, could get sprayed by a skunk in Salt Lake City.”

The Science of Stink

If you’ve ever used natural gas, you’ve smelled thiol. It’s added to the odorless natural gas to let you know the stove is on. In the case of skunk, they have enough thiol in 10 cc’s to let the world know a half-mile away after they’ve sprayed.

Skunks are hesitant to use their spray because it takes up to 10 days to refill their supply. It’s their last weapon after issuing a hissing warning, stomping their paws, and raising its tail. If they believe they’re in mortal danger, like a 260-pound cyclist slamming on his brakes only mere feet away, they’ll deliver a pinpoint accurate shot at the attacker.

I can tell you the smell is overpowering. Not only does it stink like a year-old omelet, it’s got an oily, bitter feel against your skin. My shins are nicked and scraped from hiking the hills, and post skunk attack my legs was on fire. I tried washing it off from my water bottle, but thiol is activated by moisture. And because skunk spray vaporizes almost immediately, it permeates anything it touches. My shoes, socks, shorts, shirt, backpack, and bicycle reeked after the attack. Even my wallet, pocketknife, and keys got hit.

Skunk spray has a pugnacious smell that gets everywhere, and I mean everywhere!

Popular culture tells us if you get sprayed by a skunk to take a tomato juice bath. You’d probably be better off using the tomato juice to make a Bloody Mary.

After getting skunked, you need to bathe as soon as possible. The brutal attack happened about 8-miles from home, so my wife made me ride downwind from her. After what felt like an eternity, I squeeled into backyard, disrobed outside for all to see, and immediately hit the shower. The first step to removing the smell is to oxidize the thiols into sulfonic acids, which have little-to-no skunk smell left in them.

My first of three showers consisted of just soap and water. It did nothing except get the dirt and grim off of me from the ride. The second shower I scrubbed with a grease-cutting detergent. This worked really well because skunk spray is very oily, but it didn’t meet my wife’s high standard of not having a husband smell like a skunk in the house.

For my final shower, I used baking soda to pull out the stink. This actually worked. I caked my body with regular baking soda and let it sit for five minutes. After rinsing it off, a slight skunk smell lingered, but good enough to be allowed on the couch.

The Smell of Success

I have forgiven the skunk. If I was in his position and saw something that looked like me come to a violent stop, I’d spray that sucker, too.

Skunks and humans have lived amongst each other for millenniums. And while skunks are seen as nuisance, they are actually beneficial to farmers, gardeners, and landowners because they feed on a large number of agricultural pests. They also eat a lot of rodents to help keep down disease associated with rats and mice.

In popular culture, Pepé Le Pew was a lovestruck skunk. Baby skunks are called kits and a group of skunks is called a surfeit. And because they have short lifespans, they live for about three years, I’m certainly not going to hold my encounter with the skunk personally.

Some people celebrate the Fourth of July with fireworks, I celebrated mine with a stink bomb. I strongly encourage anyone to give the next skunk they see a wide berth. Nobody should have to take three showers in a day. Oh…and about those brats and brews. Yes, I did get them after all. Indeed, the best post-trauma meal ever.

Born in El Cajon, raised in Las Vegas, educated in Reno and living in Salt Lake City. I bartend, write, box and live in Sugarhouse UT. View all posts by Ben Raskin

One thought on “Got Skunk?”